Before I start waxing poetic on why time is merely an illusion, let’s just jump right into my top three anticipated titles for February 2018!

Shiratori, Washio, and Kotooka have been inseparable since they began junior high. However, Shiratori has a secret she’s been keeping from her best friends–she actually has a big crush on Washio! Not wanting to risk their friendship, she planned to keep it a secret forever, but when Shiratori learns that Washio has a crush on Kotooka, her desire to support her friends now conflicts with her own feelings. First love blossoms in unexpected ways for these three young women and their circle of friends in this charming new romance!

Slated for release right before Valentine’s Day, Nameless Asterism looks like it’s going to be a fresh take on the love-triangle trope. Normally I wouldn’t be interested in a series with this kind of cutesy, modern art style (call me pretentious, whatever lol), but Seven Seas has really knocked it out of the park with genre-defying yuri titles (Citrus and My Lesbian Experience With Loneliness come to mind). I’m not going to judge a book by its cover with this one.

Voices of a Distant Star

Mikako Nagamine is recruited as a pilot to fight in the interstellar war against a force of alien invaders, leaving behind her one true love. Mikako’s only connection to Noboru Terao, who continues living the life of an ordinary student, is through cell phone text messages. As Mikako travels light years away, it takes longer and longer for Noboru to receive her messages, until finally one arrives eight years and seven months after she sent it…

If you followed the American manga market in 2006, you might remember when this book came out under Tokyopop. Well, it’s back, thanks to Vertical Comics!

This book is based on Makoto Shinkai’s film of the same name. Mizu Sahara, who you might recognize by her other pen name, Sumomo Yumeka, provides absolutely gorgeous art that perfectly captures the lonely atmosphere present throughout the story. This one’s definitely a classic that needs to live on my shelf. 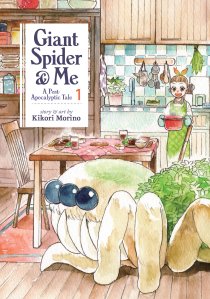 A young girl named Nagi and a giant spider make an unusual pair in this post-apocalyptic story, but living in the mountains is lonely, and they’ve managed to find each other. Join them in their strangely sweet domestic bliss as they spend their days sharing tea and throwing picnics, proving that love (and delicious food) can bring together even the most unlikely of friends.

Seven Seas snags another Alterna pixiv title this month, this one featuring a girl and her arachnid pal.

I have so many questions about this one. What the hell kind of premise is this? Why is it post-apocalyptic? Did society collapse so only young girls and spiders remain? Were they banished to the mountains for their relationship? Domestic bliss?? Cute spiders???

This site uses Akismet to reduce spam. Learn how your comment data is processed.

The Rose of Versailles Volume 4
by Ryoko Ikeda

The Girl with the Sanpaku Eyes, Volume 2
by Shunsuke Sorato